CHEF ROCCO WHALEN IN THE NEWS

May 2014 – A virtual interactive dinner leads to a savory and successful event.
Read the Article

May 2014 – South Charlotte Weekly gives Fahrenheit a nod of approval.
Read the Article

April 2014 – Chef Rocco Whalen featured in the Cleveland Plain Dealer in advance of his speech at Kent State University. Rocco speaks about creativity, his love for inventing and his personal journey at 4 p.m. Thursday, April 17 in the Ritchie Hall Theater at Kent State University. This free event is open to the public and is sponsored by the Schwebel Baking Company.
Read the Article 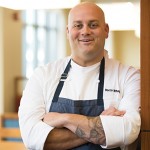 Fahrenheit is proud to be among the Plain Dealers A-List Restaurants. Featured among 99 other Cleveland area hot spots, the PD exclaimed “Fahrenheit: Your favorite dishes, only a little more extravagant, at Rocco Whalens spot.” Other highlights include the “speed and precision of the serving staff” as well as Chef Roccos creativity and ability “to play all the flavor notes full tilt” Check out the full article here.

Rocco Whalen spent his childhood in Mentor and would tell people he wanted to be a chef when he grew up. Well, he did grow up, he did reach his culinary dream, and today he is the executive chef/owner of the very popular Fahrenheit restaurant in Clevelands Tremont neighborhood.

On a recent and very cold Saturday night we headed across the Cuyahoga River to Professor Avenue. As we drove to the front of Fahrenheit, we were relieved to see valet parking available, for $5, as the streets were already lined with parked cars. For more of this story, click here.

February 2014 – Fahrenheit Charlotte Featured in Charlotte Business Journals
“Chef Rocco Whalen wanted to be the one to open Charlotte’s first and only rooftop eatery. He’ll do so Monday, when Fahrenheit restaurant opens on the 21st floor of the Skye Condominiums uptown.
That mixed-used development at 222 S. Caldwell St. includes 67 residential condos and a 172-room Hyatt Place Hotel, as well as Whalen’s restaurant, at the corner of Third and Caldwell streets.”
Read the full article by Jennifer Thomas of Biz Journals

February 2014 – Check out Chef Rocco’s LIVE interview with the Huffington Post about The Taste of the NFL! Click here for INTERVIEW.

February 2014 – Chef Rocco participates in Taste of the NFL

May 2013 – Fahrenheit announces a 2nd location in Charlotte, NC, Opening Fall 2013 in the NEW SKYE Condominiums!

June 2005-Present –Chef Rocco was one of the feature Chefs at Alexs Lemonade Stand Great Chefs Event in Philadelphia, PA. The Chefs event, founded by Chef Marc Vetri (Philadelphia, PA), is an annual event in which all time and proceeds are donated to Alexs Lemonade Foundation fighting childhood cancer.  The event has been gaining national attention with a 2nd event announced in Los Angeles this year!

April 2012 HBO Weight of the Nation & Kaiser Permanente Speaker: – Chef Rocco was asked by Kaiser Permanente & HBO in conjunction with Time Warner Cable to be a guest panel speaker for HBOs premiere of the documentary series Weight of the Nation to share his journey and how we as a nation need to start a change with the way we eat. http://theweightofthenation.hbo.com/

Chef Rocco was a guest of Martha Stewart on her Sirius Radio show at 9 a.m. EST, December 8th and again at 3:45 p.m. EST on December 11th. Rocco appeared on behalf of the “Taste of the NFL”  and discussed the event at the Super Bowl, Cleveland, Fahrenheit, cooking tips and fun stories.

The “Sunday Night Football” Cookbook features recipes from NFL stars including Browns linebacker Willie McGinest who contributes his recipe for lemon-herb chicken with asparagus. The Steelers are represented in the SNF Cookbook by Hines Ward with his Korean-style braised short ribs and rookie Limas Sweeds recipe for chicken and shrimp fettuccine.

The “Sunday Night Football” Cookbook also features recipes from prominent chefs from each NFL city including Pittsburghs Anthony Zello of Bigelow Grille and Bob Malone of Treesdale Golf and Country Club; as well as Clevelands Rocco Whalen of Fahrenheit and Paul Minnilo of Baricelli Inn.

Bobby Flay and Emeril Lagasse represent their favorite NFL teams and NBCs “Sunday Night Football” crew add their favorite Sunday Night recipes to the cookbook. Faith Hill and John Madden not only provide some of their favorite recipes, but also write special introductions. The book contains full meals and a section on Super Bowl parties, just in time for the next Super Bowl on NBC. Proceeds from the cookbook, which is available wherever books are sold or at SundayNightFootballCookbook.com, go to support local food banks across the U.S. through Feeding America (formerly Americas Second Harvest).

Cleveland Magazine, May 2008: Rocco Whalen loves food – shopping for it, cooking it, eating it, discussing it.  “I enjoy everything about food,” says the gregarious owner of Fahrenheit. Read more…

For Rocco Whalen, chef-owner of Fahrenheit restaurant in Clevelands Tremont neighborhood, the next few days dont only lead up to Easter, they are also the dawning of a chefs most fruitful season.

“I was raised Catholic, so this is a very important religious time,” Whalen says. “But Easter is such a great holiday — and it comes at a wonderful time of year this year. Its the culmination of the end of winter and the beginning of spring. The snows going to be ending, one of these days, and for what I do, as a chef — wow! Things are fresh, right out of the earth and right out of the water.” Read more…

It was dubbed “The Party with a Purpose”.  Others referred to it as the “Ultimate Gourmet Tailgate Party”.  By any name, the 2006 Taste of NFL Cleveland Celebrity Dinner was an outstanding success on multiple levels… Chef Rocco Whalen served Lobster Nachos.